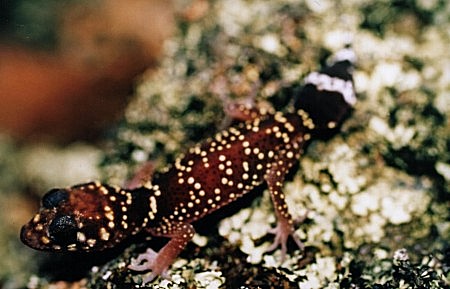 The Thick-tailed Gecko is a large terrestrial gecko widespread across southern Australia. Often called the Barking Gecko, in reference to its characteristic defensive call, this is one of the most vocal Australian geckos.

It is important to observe the natural habits of any gecko before attempting to restrict them to a small cage. The intention of this paper is to inform the novice keeper on the care and maintenance of this species, hopefully leading to the reproduction of one of Australia’s spectacular geckos.

I house most of my Thick-tailed Geckos in standard 61 cm (24 inch) aquariums. The majority of my terrestrial geckos are housed in aquariums, I find aquariums have many benefits.

An advantage of them being glass is that no matter how much water is sprayed the enclosure is unaffected. No lids are necessary to cover the aquariums because the animals are unable to climb out. Having open tops reduces noise and commotion during feeding time, which often causes the geckos to retreat, and of course provides maximum ventilation.

The substrate of my Thick-tailed gecko enclosure is a mixture of peat moss and sand at a depth of approx. 50mm. I also use fine desert sand in a couple of enclosures, which is just as successful. Flat paving bricks separated by small square pieces of wood, provide steady refuge crevices (Plate 2). Two crevices are present, one where the geckos can retreat under the bottom brick to the glass surface as a cool retreat, and one between the two bricks. This provides adequate space for various geckos to avoid each other if desired and provides a temperature gradient. All the bricks can easily be removed allowing total access to all geckos at any time.

Generally I house my Thick-tailed geckos in pairs, however I have successfully housed them as one male to two females. In the wild these lizards actively form aggregations and probably have a complex social structure (Kearney et al, in press).

Unfortunately the geckoes aren’t exposed to natural light cycles, however the natural cycle is closely mimicked utilising a 40w fluorescent tube connected to a digital timer located above the enclosures.

During the night the room is lit by a 25w blue globe located on the ceiling. Although geckos have good night vision, I feel that all my geckos benefit from the dim light produced during their active period, aiding them in locating their food items. Other reptile cages in the room raise the ambient temperature considerably. Due to the Thick-tailed Geckos being easily heat stressed, they are housed at the lowest level within the room. This also enables me to control the heat more easily, and they experience lower temperatures during the winter months.

Throughout the summer months the air temperature in the top crevices ranges between 23-27° c, dropping to the mid to low 20° s throughout the night. The geckos can escape this heat by retreating to the lower crevice to lay on the bare glass. However, the above temperatures seem to be comfortable for them. In the winter months I let the temperatures drop quite low, especially during the night, trying to keep them as natural as possible. The day temperatures still reach up to around 18° c but drop as low as 9° c over the night period. Thick-tailed Geckos have been observed active in the field with a body temperature of 8° c (M. Kearney pers. comm.)

A strip of self regulating heat tape (8w/ft) runs along the underneath of the front edge of the cage. Individual bricks are placed directly above the heat tape to spread the heat to a mild, even temperature. This raises the brick temperature approximately 4-5° c above the maximum temperature. The bricks also play a role in preventing egg deposition directly on the heat tape. The geckos quite regularly lie on these bricks during the night, especially after feeding.  Most importantly when females are gravid they spend a lot of time laying flat on the warmth. This behaviour has been observed in the field on the warm rocks heated by the day’s sun (pers. obs., S. Comber and M. Kearney). The heat tape is on all night throughout September to March, for an hour after dark during April and August, and is switched off completely during May, June and July.

The main diet is a combination of appropriate sized cockroaches and crickets dusted with Rep-Cal Calcium and Rep-Cal Herptivite. Spiders as large as huntsmans, as well as moths are also offered and readily accepted. Hatchlings and young animals are fed the same diet as the adults with the addition of flies. Feeding is carried out while the geckos are active. The females seem to dominate during feeding, so it’s important to see all individuals eat, however males don’t consume as much as the females. The cage is lightly sprayed one to two times a week leaving plenty of water droplets from which the geckos often lick. A small shallow water bowl is always present but is rarely used.

The eggs are artificially incubated in a mixture of medium grade vermiculite and water (60g : 55ml) in a sealed container. The container is aired once weekly to supply the eggs with fresh air. The temperature ranges between 28-29° c, at this temperature the eggs hatch in 64days (± 4days). The eggs are quite large measuring an average size of 24mm x 13mm, and with all the pairs of eggs I have hatched there has been a 1:1 ratio of male to female.