Note that this is a reduced and modified version of an article originally published in Monitor Vol. 13 No. 2 August, 2004. Back issues are available from the VHS. 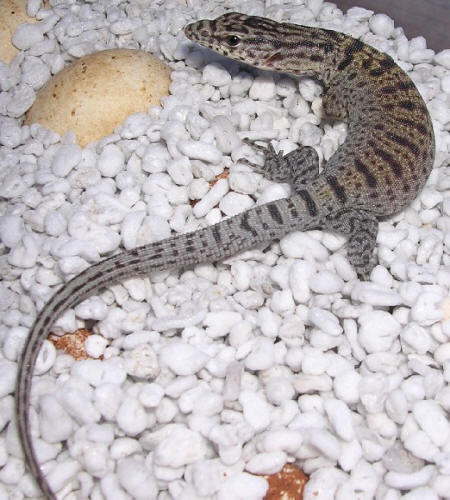 The Pygmy Mulga Goanna (also known as Gillen’s Monitor) is a small goanna species growing to around 40cm in length. The Pygmy Mulga Goanna is well adapted to arid regions usually found sheltering under the bark of trees in the genera Acacia, Casuarina and Eucalyptus. Gillen’s Monitor has been in captivity in Australia and overseas for many years but it is only in the past few that appropriate husbandry techniques have been developed and applied and this seems to have taken longer for Australian keepers than those in Europe and North America.

Adults and juveniles of this species may be housed in similar conditions. This species is extremely hardy, as long as one requirement is met; a hot basking spot of at least 45°C and preferably 60-70°C. The basking spot is best provided using a spotlight or similar, facing down on to a rock or piece of wood (ensuring it will not burn). The length of the enclosure should be at twice that of the largest lizard to be kept in it, at the very least, and larger is better. In the wild, this species is very arboreal, sheltering beneath the bark of trees, however, in captivity is seems to adapt very well to a more terrestrial mode of life, and in the author’s experience, they actually seem to prefer it. These lizards enjoy space to run and many enclosure furnishings to explore and climb on.

Contrary to popular belief, UV light, natural or otherwise is not necessary and to the author’s knowledge, has not been demonstrated to be beneficial for goannas in any way. Many consecutive generations of healthy goannas have been produced without any form of UV light.

I keep my Varanus gilleni on a substrate of recycled newspaper pellets (breeders’ choice kitty litter) and have been very pleased with the results. Other keepers say that this substrate is absolutely terrible due to the possibility of it being ingested and use sand or newspaper, apparently also with good results. I have had animals ingest the breeders’ choice with no ill effects.

A variety of feed items are offered to my goannas, including (in approximate order of volume) cockroaches, thawed whole small fish (Gambusia holbrooki), stick insects, spiders, crickets, mealworms, meat (including kangaroo, beef and chicken) and occasionally others. Most meals are coated with calcium and multivitamin powder.

Very large feed items are swallowed with apparent ease and no ill effects but the majority of items provided are smaller than the goannas’ heads (as reported by many others, highly venomous spiders and large species such as huntsmen are eaten with no trouble). When insects are offered, fast running individuals are preferred to slow moving or dead individuals (although dead fish and pieces of meat are voraciously seized and swallowed). Stealing feed which another goanna is trying to swallow is often preferred to catching or picking up new feed.

I have measured growth rates of juveniles at around 5mm per week over their first few months.

As these lizards originate from very arid areas, it is not essential to provide standing water, and it may not be necessary to provide water at all, however, it is recommended that water be provided every few days. I generally pour a small amount of water over on to the surface of an object in the enclosure and any of the lizards which are thirsty will drink from the small pool, generally each lizard will drink one to four times per fortnight, although sometimes they will drink less, and sometimes more, particularly in the case of females which are gravid or have recently oviposited.

These goannas are fairly active, especially when hungry, and will explore the enclosure searching for insects, in my enclosure, a stray cockroach is occasionally found and sometimes stick insects are introduced secretively so that they will be found during foraging activity. One very notable and important aspect of their behaviour is the use of the basking spot, even at temperatures exceeding 750C. Temperatures this high are not considered to be necessary, a basking site temperature of 450C is probably sufficient, but given the alternative the goannas will choose a higher temperature and so it is provided.

Juveniles as young as a few days will attempt copulation. I have observed adult females displaying typical male courtship and copulation activity with other individuals, male and female, the positions achieved with females are identical to normal male-female copulation, while males struggle violently to escape. The reason (if any) for this behaviour remains unknown, but is apparently quite common in this species.

The critically important things to keep in mind when keeping this species are supplying a hot (preferably greater than 50-60C) basking spot and providing a diet based on insects, with calcium and multivitamin supplements being beneficial and possibly essential if captive bred insects form the staple diet. If these two simple requirements are met, the lizards will thrive and even reproduce quite readily. Eggs are laid in spring and early summer, clutch size is typically around 3-6 eggs and several clutches per female per year may be produced. The eggs are very easy to hatch in standard incubation conditions.

The Pygmy Mulga Monitor is a wonderful small goanna to work with. It is adaptable and easy going in regard to captive requirements and highly adaptable in terms of enclosure design. Its active and inquisitive nature makes it a pleasure to care for and observe