History of the Jacky Dragon 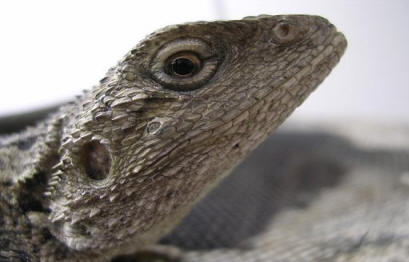 The Jacky Tree Dragon is a unique reptile to Australia; this is because it is one of the first named Australian reptiles. Discovered in the late 1700’s by an English zoologist, the Jacky Tree Dragon (Amphibolorus muricatus) was first described by (White, 1790) in ‘Journal of a Voyage to New South Wales’.

I first discovered the Jacky Dragon when I was quite young and was developing an interest in reptiles. With many sightings of reptiles such as the Blue-tongued Lizard (Tiliqua scincoides) and the Copperhead snake (Austrelaps superbus) it was a very exciting day when I first laid eyes on the tree dragon.

With great speed and the ability to run on hind legs with its front feet barely touching the ground, I knew it was going to be a hard animal to catch. The colour of its scales made it hard to sight at times as it could blend into almost any environment it happened to come across. So with keen eyes watching for any sign of movement I set out to have a closer look at the Jacky Tree Dragon.

The day did come when I caught my first dragon, distracting it with one hand, and quickly grabbing it with the other I got to hold my first tree dragon. At the time I was unaware of laws about picking up wildlife, and lack any knowledge on how to care for the dragon so it was soon released, back in the place where I had caught it.

Back in 1995 the Jacky Dragon was a very popular small dragon to keep. These numbers started to dwindle towards the year 2000 as they were being bred in large numbers and were becoming hard to sell to other private keepers.

In the last two years the Jacky Dragon in captivity has started to become popular again. As more and more people start keeping reptiles every year the demand for small dragons that don’t require a lot of room has increased, thus making them a popular dragon again. Already in the U.S.A. more reptiles are kept then cats or dogs, purely based upon maintaining and care, as well as space of course, so really it was only a matter of time before the trend started to take flight in Australia as well.

The bearded dragons (Pogona spp) for instance are a prime example of smallish dragons being kept in captivity, and with the reputation for being great handlers, the room required, and the ease in breeding this species it is no wonder other small dragons are becoming popular.

The Jacky Dragon grows to about 30cm TL, although they can be a very active dragon, they don’t really need a lot of room. A 120cms X 60cms X 60cms melamine enclosure will comfortably house four to six dragons without any problems. The two reasons for this is because they love height, so offering branches and logs for them to climb on increases the area of the cage, and because they are a sociable dragon and live happily together even with multiple males.

Like almost all dragon species in Australia ultra violet light exposure is a must in your dragon enclosure. Although there is nothing better than the sun, artificial U.V. needs to be supplied if not kept outside in an outdoor enclosure. The NEC T-10 is a more than adequate light to supply the artificial U.V. requirements.

When heating the Jacky Dragon it is important to remember they aren’t found in very hot environments. Although there has been accounts of them being found in places where the heat can reach the high 30’s to early 40’s I prefer to keep my dragons at around 26 degrees Celsius during the day, with heating switched off at night for a more natural climate change. Obviously the temperatures during summer will reach higher then 26 degrees Celsius so I switch all lighting off on those warm summer days allowing the cage to warm up slowly. These dragons will be fine on warm summer days of 35-40 degrees Celsius, as I have had them on days reaching these temperatures, just make sure plenty of water is always available for drinking and soaking in.

As the Jacky Dragon is found in woodland areas in Australia I try to mimic these surroundings as much as possible in captivity. I use sand pit sand on the ground, but make sure to feed the lizards in a container so that no sand is digested, which can lead to possible impaction.

Some people have used other substrates like mulch and found it works well with these dragons, but I prefer the more natural approach.

Jacky Dragons are strict insectivores, eating anything with more then four legs. I mainly feed the Jacky’s on cockroaches, and grasshoppers when available. I do have one female that eats bearded dragon food, but this is hard to introduce to the Jacky Dragon as they prefer their food to be moving, and show little to no interest in food that lies still.

As mentioned earlier water should always be readily available for drinking purposes, although you very rarely see them drink it is an important thing to have in any cage setup.

An adult dragon will feed on 4-6 roaches 2-3 times a week, only being slightly increased to introduce the breeding season.

During mating season males may display aggression towards each other, although this is only to establish pecking order, it can seem to be quite violent. All those who have witnessed this aggression have not reported any serious health issues with their males. I did see a little bit of blood inside the mouth of the less dominant male, but he backed down and the bleeding didn’t last more then a few minutes. I observed them as much as possible over the next few days and they seemed to be okay together again, sleeping and eating from the same food bowl at the same time. It would appear the pecking order had been established and that they were going to be fine living together.

Tail thrashing may be observed as well by males trying to attract females, this also occurs in young dragons when excited by food. I have also noticed that young dragons will actually arm wave at you in excitement once they learn the feeding routine and realise you are about to feed them.

To get the dragons to breed was a step which I had to approach in the dark. Not much written information was obtainable on the Jacky Dragon in relation to breeding. Living in Victoria and having a large population base in the wild I decided to mimic the outside temperatures as much as possible and see what happens. It made sense to do this, and is probably a common practice with most reptiles if kept in the state in which the reptile is found.

To my delight my first cooling of the dragons was a success and both females laid two clutches. The first female had two clutches, one with 6 eggs and another with 5. The second female whom I thought to be younger and wasn’t expecting a large clutch, if a clutch at all, laid 7 eggs and then 9 eggs, the surprise with her though was the way she laid the eggs. Most lizard species, if not all, dig a hole to lay their eggs in, this female just dropped them where ever she was standing. An egg was clearly visible outside of her vent, so I took the opportunity to offer a roach and see what she would do. Although I do not recommend this, and it obviously would waste valuable energy in the egg laying process she quite happily stopped laying her egg to eat the roach. She then kept an eye on me to see if there was more food coming, and when she realised there wasn’t she went back to egg laying.

To catch her in this state of laying was a rare occurrence, as many reptile keepers miss their reptiles laying, thus the only reason why I offered her a roach, to see what would happen and knowing I may never get the opportunity ever again.

Incubation was somewhat tricky, just like getting the Jacky’s to mate in the first place. Data was unavailable to tell me what temperatures the eggs should be cooked at, and the only information I did have wasn’t reliable as they could not tell me 100% if the temperatures stayed the same, in fact they were pretty sure there was a lot of fluctuation.

As a result of this I lost a large number of eggs, out of 27 eggs only 9 eggs hatched. The first to hatch did well and went to a good home healthy and feeding well. The next lot I had problems with, as the incubator wasn’t the best and I suffered a large heat spike during the middle of incubation. This led to kinks in tails, and regretfully 3 Jacky’s dying as for some reason, no matter what I did, they showed no interest in food.

Although they drank water, and looked actively like they were interested in food, they still did not eat, and being smaller then a pen lid, it was hard to do anything but watch them slowly waste away. Assist feeding was tried but failed as their mouths were too small and I didn’t want to hurt or distress the dragons anymore then I had already.

As a result of some research I have discovered that incubation temperatures should be kept at 28-30 degrees. Although next season I am going to test the theory that these eggs can be incubated at room temperature, if kept in the right conditions, a further update on this to follow.

The Jacky Dragon is found all the way from southern Queensland, through N.S.W. and Victoria and into S.A. It is a colder climate dragon predominantly living in woodlands, and grassland areas.

The Jacky Dragon will often be found in these areas basking on fallen over logs and man made fences. The reason for this is because they have wonderful eye sight and can pick the slightest movement, whether that is food or an approaching predator.

Great with small children or big children I recommend the Jacky Tree Dragon for an addition to any reptile collection, a very active lizard that will bring lots of laughs as they explore their every day environment.