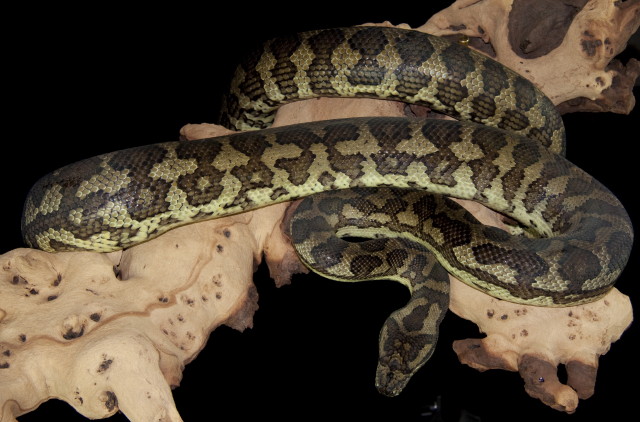 The East Queensland Carpet Python (also known as the Coastal or Brisbane Carpet python) is one of the best known and most commonly kept of all Australian snakes. Throughout its range it

shows great variability in colour, size and other characteristics and will probably be divided into several subspecies in the future. Morelia spilota mcdowelli from the northern extreme of its range are probably best kept warmer and at higher

humidity than those coming from the southern extreme of their range (where they gradually merge with the Diamond Carpet Python, Morelia spilota spilota, which has significantly different husbandry requirements). Despite this, most forms of this taxon are very hardy and will tolerate a wide variety of conditions, as long as a few basic criteria are met. The carpet pythons from south east Queensland are said to be the largest of all the carpets, sometimes reaching over three metres in length, although most adults are between two and two and a half metres.

Being a large, attractive looking and easy to care for species, they make excellent captive specimens.

It is probably worth noting that some keepers may use different methods and these may work equally well or better than those described here. The information given is mostly based on the methods used successfully by the author and are given as a guide only. Most of the information given here can be applied to other forms of carpet pythons, and other python species.

The most important criterion in enclosure design is the existence of an appropriate thermal gradient, this is most easily achieved by placing the heat source at one end of the enclosure. Ideally, the warm end should be kept at 32-35°C and the cool end around 24-26°C. The snake will probably spend most of its time at the higher end of the gradient, but the opportunity for the snake to cool down is important. I find that the easiest way to provide a thermal gradient for juveniles is to place a heat mat beneath half of their enclosure, this is set to the desired temperature. For adults, a similar set up may be employed or the enclosure can be heated by heat bulbs or coloured light globes, preferably in conjunction with a thermostat placed in the middle of the enclosure, at about the height the snake spends most of its time (usually near the cage floor). The opportunity to bask for several hours per day can be beneficial, this is most easily facilitated by installing a spotlight facing down, under which a rock or similar object is placed, creating a basking spot. It is most convenient to use an electronic timer to switch the basking lamp on for the desired period each day, rather than doing it manually.

A hide box should be placed at the warm end of the enclosure (but not beneath the basking spot if only one is provided) and also one at the cool end. If possible, it is also good to provide a hide which is elevated above the cage floor. Hide boxes should ideally be only just large enough for the snake to fit inside. The more snug the fit, the more safe and secure the snake will feel.

Climbing branches or similar furnishings are valuable as they allow the snake to exercise, make better use of the available space and carry out natural behaviour.

It is my opinion that the best substrate to use is newspaper. It is absorbent and has the big advantage of being cheap enough to completely replace quite frequently, ideally this includes immediately after every time it is soiled, however, carpet pythons (and snakes in general) are very tolerant of dirty conditions and if snakes are in the process of sloughing, copulation or are otherwise best not disturbed, it is preferable to wait before cleaning the enclosure.

As a general rule, the length of the enclosure should be around half to three quarters that of the snake to be housed in it (larger is not necessarily better).

Fresh water should be available at all times and is best provided by placing an appropriately sized bowl of water at the cool end of the enclosure. The humidity inside the enclosure will be affected by the size of the water bowl, as well as the amount of ventilation and whether the water is at the warm or cool end.

Juveniles are usually only sold if they will readily accept thawed rats or mice and for a variety of reasons, these are generally the best staple diets for carpets. Larger carpet pythons can be fed rats, rabbits, guinea pigs, chickens, pigeons and other appropriately sized whole animals. Some individuals will have definite preferences for certain prey, however, thawed rats are generally the easiest and best to use and if these are accepted, there is no need to vary the diet for the snake’s sake as whole rats contain everything a snake needs in the right proportions.

It is always best to see a snake feed before you buy it, so that you know for sure that it will readily eat the desired prey type. If you obtain a juvenile snake which will not feed, ensure the cage is set up appropriately, wait for a week or two for the snake to settle in to its new home, and if it still will not feed, contact the person you bought it from and ask for advice. If this is of no help, you can try different types of prey, live prey or if it is legal in your area and you have the opportunity, try skinks or skink scented prey. If nothing else works, contact an experienced reptile keeper for advice or assistance.

Once they start, carpet pythons are generally very keen feeders and can grow at startlingly rapid rates, in some cases 3cm per week or more. Meals should be around 10-15% of the snake’s weight. They are capable of consuming enormous prey, even items larger than themselves, but this is potentially dangerous and not recommended. Meals should generally be offered every five to ten days for younger snakes and about 10-15 times per year for adults. If the snake appears to be under or over weight, adjust the feeding accordingly. 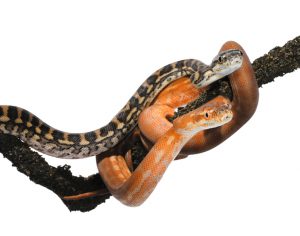 Individual M. s. mcdowelli will generally hatch out very snappy, but will usually settle down and become very placid after a few months, particularly with regular gentle handling.

Sloughing problems may arise if the humidity is too low, if this is occurring, try raising the humidity by using a larger water bowl, placing the water bowl at the warm end during slough cycles or spray the enclosure with water during sloughing cycles. Some individuals seem to enjoy a spray with water every now and again, even if they are not sloughing, sometimes they will drink water droplets that form on their bodies.

Health problems are very rarely encountered in this species, as long as the most basic care is provided. Problems, particularly respiratory infections, may occur if a snake is kept too cold for too long, especially if low temperatures are combined with high humidity. If this occurs, restore favourable conditions and if the symptoms do not disappear within a day or two, seek help. One relatively common problem which may be encountered is mite infestation. These most commonly come from newly purchased animals (be particularly wary of pet shops) and may quickly spread through an entire collection. If you have mites, they may be easily treated using aviation spray (“top of descent”); remove the water bowl and wash in hot water. Spray the enclosure, with the snake in it and leave for 24 hours before replacing water, do this two more times, about five-seven days apart and you should be mite free, but keep a very close eye out for mites for the following few months.