A PHOTOGRAPHIC JOURNEY ACROSS NORTHERN AUSTRALIA

Heath & Kwai are both keen naturalists, who have been keeping captive reptiles for more than 15 years. Kwai is a Keeper at Werribee Open Range Zoo, with a particular interest in native herpetofauna and fish. Heath has a degree in zoology, with a particular leaning towards the ecology of elapid snakes.

Heath and Kwai will present a photographic record of their multiple herp trips across the northern half of Australia, from the arid red centre, to the tropical savannahs of the Kimberley, and the lush vine forests of Cape York Peninsula, as they search for iconic and rare species such as Pilbara Rock Monitors, Death Adders and Green Pythons. They will provide an insight into the reptiles, amphibians and other wildlife of the north, and the diverse habitats that they occupy. 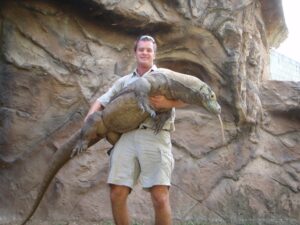 Ryan is new to Victoria, having lived all his life in Queensland, spending his last 7 years working at Australia Zoo on the Sunshine Coast.  He is now employed as a senior reptile keeper by Zoos Victoria at Melbourne Zoo.  Ryan will talk about his experiences in the different styles of keeping he experienced between these two institutions.   The contrasts between the two climates has forced him to be much more mindful of establishing particular micro-climates for indoor exhibits where outside environmental factors can vary so greatly.  Australia Zoo had Ryan out in the field on conservation properties and on croc research regularly.

He also recently conducted a survey in the Southern Mekong Delta in Vietnam which may interest members.    Some of the observations of reptiles in the trade were quite alarming and unexpected. Ryan will talk about some of his findings on the survey and in the trade as it is very different to what we experience here

A review of this meeting is in Odatria  #6