Our final meeting for the year (and AGM) is:

In 2007 Cindy briefly worked at the Darwin Crocodile Farm before moving to Ballarat to work as a reptile keeper at Ballarat Wildlife Park. Ballarat has a variety of native and exotic reptiles including giant tortoises, alligators, cobras, native Elapids, iguanas, monitors, pythons and boas.

In 2010 Cindy moved to Cairns to work as a reptile keeper at Cairns Tropical Zoo where she once again worked with estuarine and freshwater crocodiles, native pythons and elapids, iguanas, monitors, dragons and skinks etc.

2011 saw Cindy working as a Wildlife Ranger for Qld Parks and Wildlife (later the Qld Department of Environment and Heritage Protection) where, among other things, she participated in wild crocodile management through environmental surveys, problem crocodile assessments, croc trapping, and public education.

Cindy left in 2013 to have babies and then started casual work back as a zookeeper at the Cairns Wildlife Dome.

Cindy will be presenting a talk based around her time in South Africa with photos, stories, and information gained on some of the brilliant African species that she encountered. Discussion will include the varying attitudes to reptiles, conservation issues, and snakebite incidence.If time permits Cindy will also touch on crocodiles, from her perspective as a farm worker, zookeeper and Wildlife Ranger.

So to ensure you don’t miss out on this interesting evening, mark it in your diaries now, for WEDNESDAY 9th DECEMBER from 7.15pm to 10.30pm at the Prahran RSL, 301 High Street, Prahran. Don’t forget all the usual auction and pizza action. 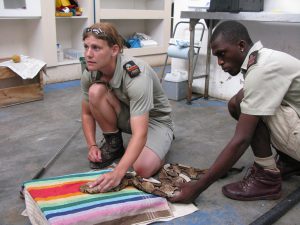 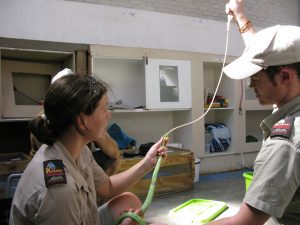